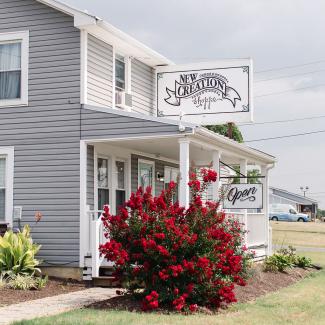 The Butterfly Effect of New Creation

Angela M. Carter | Sep 27, 2021
In theory, The Butterfly Effect is when an action, as slight as the flapping of a butterfly’s wings, can result in a tsunami of change in a place untouched and far away by the motion those wings made–this is how the global effect of Harrisonburg-based nonprofit, New Creation can be described. Open to the public for six years and eight years in total, the ultimate goal is to create a tsunami of empathy, awareness, and education to counteract sex trafficking on a global scale. Sabrina Dorman-Andrew, Co-Founder and Executive Director of New Creation, believes that what negatively affects any community in the world should be the responsibility of every human, Harrisonburg-based or not. She believes that we all need to step up as a “good global citizen” on the mission to help support vulnerable individuals and communities in becoming empowered, educated, and lead self-sufficient lives, one of the most realistic avenues in which New Creation believes sex trafficking can be combated. However, the road to education, stability, recovery, and independence for those marginalized and vulnerable is not always the route that many believe it is or should be to make New Creation’s Butterfly Effect effects long-lasting for the future of all humanity. A majority of the nonprofit organization’s mission is based on the re-education of preconceptions made regarding sex trafficking–” there’s an assumption that a Hollywood ideal, sensationalized” approach should be taken to win the battle; instead, New Creation takes a unique approach, by advocating for job creation, and avenues for an individual’s sustainability, to be one of the most critical factors in persevering over sex trafficking and prostitution.

Before Co-Founders and life partners, Steve and Sabrina set out on the journey of making worldwide changes together, and they saw a place in the world where their faith could make a difference. Their organization’s journey came while endeavoring to help a small group of women by restoring a home to offer a group of women stability in an uncharitable, uncertain time in all their lives. Unarmed with many of the resources they required but driven by their faith, they realized a need and could meet that need with the community’s help. At the time, their daughters were seven and eight years of age, and both worked full-time. When most would have shied away from a topic thought to be unrelated to our community and disconnected from our surrounding world, Steve and Sabrina “couldn’t stop thinking about it” and left all the luxuries and securities of the corporate world to embark on an unfamiliar path to help vulnerable individuals. Communities to have access to resources in escaping a life of prostitution, solicitation, and manipulation. When most open a newspaper and read a story about sex trafficking, they may feel sympathy and empathy; however, they probably also disconnect from how that story relates to their community and family unit. In their way, Steve and Sabrina were familiar with how vulnerabilities, out of one’s control, could create a scenario in which individuals could be trusting and unguarded against “master manipulators” while believing that those very individuals have the best of intentions towards them.
Once a single mother struggling to make ends meet, Co-Founder Sabrina remembers the desperation she felt before becoming a family unit with her husband, Steve. While Sabrina shared her personal story, her eyes clouded with tears as she spoke about the support she’d received from her parents throughout her life, especially once she became a single parent. “You don’t choose that [type of support]. No matter how many mistakes there were, or I could’ve made. I could’ve been disowned like many others in my position, but they were always there for me,” she said. While she speaks of her family, there’s a wave of emotion that hits her, almost bittersweet. Sabrina shows gratitude for her family and how they were always present for her. However, the other part is a look of sadness for all those New Creation endeavors to help support them because they most likely did not receive the same support from those in their lives during their most vulnerable times. “Had the wrong person entered into my life while I was that vulnerable, my story might be different,” she said. “There’s a misconception of what a victim is…these individuals had people sniffing out their vulnerabilities, and many of these ‘victims’ are promised something that is never delivered to them…and they didn’t know it until it was too late.” 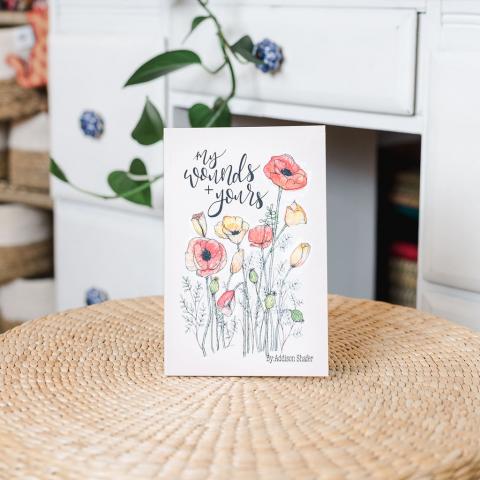 New Creation believes that connection is a potent weapon when facing sex trafficking. “We’re all wounded, hurt people,” Sabrina said. “Lack of support is a huge contributing factor in how vulnerable individuals, even accidentally, get involved in sex trafficking and prostitution.” When asked how New Creation helps those individuals, Sabrina’s face lights up. She smiles widely, while a tear still rests underneath her right eye, and with every confidence found in the world, responds, “Job creation is my passion. It ends a cycle of poverty. We are here to help them [the individuals] see options, without judgment.” Imagine if the world took this approach for every problem in the world. Imagine how many more would reach out for help instead of living in a continuous cycle of shame. Co-Founders, Sabrina and Steve, believe that our community in the Shenandoah Valley is full of like-minded, caring supporters, ready to be a part of New Creations’ Butterfly Effect. The corners of Sabrina’s mouth rise while she speaks of local donors and the effect of their support. “You’re letting them [those subjected to sex trafficking] be their own hero. We cannot thank our supporters enough. They always come through. We started off helping one group of women. Now, we have 70 different organizations helping us to change communities globally. People in our community are legitimately kind,” she said.
As victorious as New Creation has been in achieving its mission and obtaining support, it does not come without a cost to Co-Founder Sabrina and her immediate family. When asked about the most challenging days, she sighs. Her sight lowers to the table in front of her. “It’s heartbreaking to know that the age of those affected is getting younger and younger. What we all understand to be going on in the world is like your house is on fire and you only have a teacup of water. We keep showing up. I’ve wanted to quit. But I decided to continue and realized I couldn’t check everyone’s boxes. We decided to focus on prevention, education, and job creation,” she said. This approach may be slightly different from what they envision combating sex trafficking to look like, but New Creation’s reach is working and has expanded to as far as India and Nepal.
Beyond New Creation’s social media posts and storefronts exists a united family, but not without its sacrifices of being a part of an organization that helps empower those that some in the world were once trying to control. “We’ve been through threats. I walked into a courtroom to wonder if the perpetrator would remember my face. We have a shop open to the public. How do I know they [the perpetrator] won’t find out who I am and where we’re located?” The mission does not come without tribulations, even personal.
Co-Founder Sabrina shared the personal story of her relationship with her daughter, Addy. “I want more than anything to be a great mom,” Sabrina said. There was a time I worried that doing the type of work we do was not fostering a close relationship with Addy, but now she chooses to be a part of it. I’m thankful the Lord protected our relationship. Someone or something may try to tear you apart, and it’s the very thing that makes you who you are, what you do–resilient,” she said, with her eyes bright and hopeful.
Sabrina has seen the effects of her family’s perseverance first-hand. With pride, she shared the story of her daughter, Addy, who openly fights the stigma of depression and anxiety, through sharing her story through poetry. Her daughter is an active member of the New Creation shop and an active advocate in our community and beyond.
Fortune Teller - Written by Addy Dorman
"Her sweet smile had collected dust,
and her eyes no longer sparkled
like they once had.
She found herself in a constant state of loneliness.
It was so uncomfortable,
because it had become familiar.
This is a tragedy
because she is a girl
who finds comfort in knowing things.
If she had a choice,
she would wrap a multi-colored turban around her head,
hover her fingers over a crystal ball,
and transform into a fortune teller.
Maybe then she could look in the mirror
and see purpose,
see a plan,
see a future."
When you are a butterfly, you can’t always witness the effect of your fight on the world around you. Sabrina’s faith in humanity and beyond is most apparent. New Creation is not only the story of a connection made through empowerment. Still, it is also an example of the importance of relationships in the Co-Founders’ family unit and dedication to making a change in the world beyond their own lives. Sabrina and Steve joined forces in marriage, faith, and service, remembering the importance of empathy. Many of us take for granted what we’ve always had, but it’s apparent that Sabrina kept her appreciation for family support during her hardships, close to help those that don’t have the same life gift of support. “Family is why New Creation is here. They are my team.” This wonderful organization has found a way to multiply all its own family’s love, support, and perseverance and send it to communities worldwide. One purchase from New Creation can help give a gift that many of us never receive and possibly save the lives of those it serves. This family is a gentle tsunami of care, created with the gentleness of flapping butterfly wings but fueled by passion beaming larger than the sun above it. 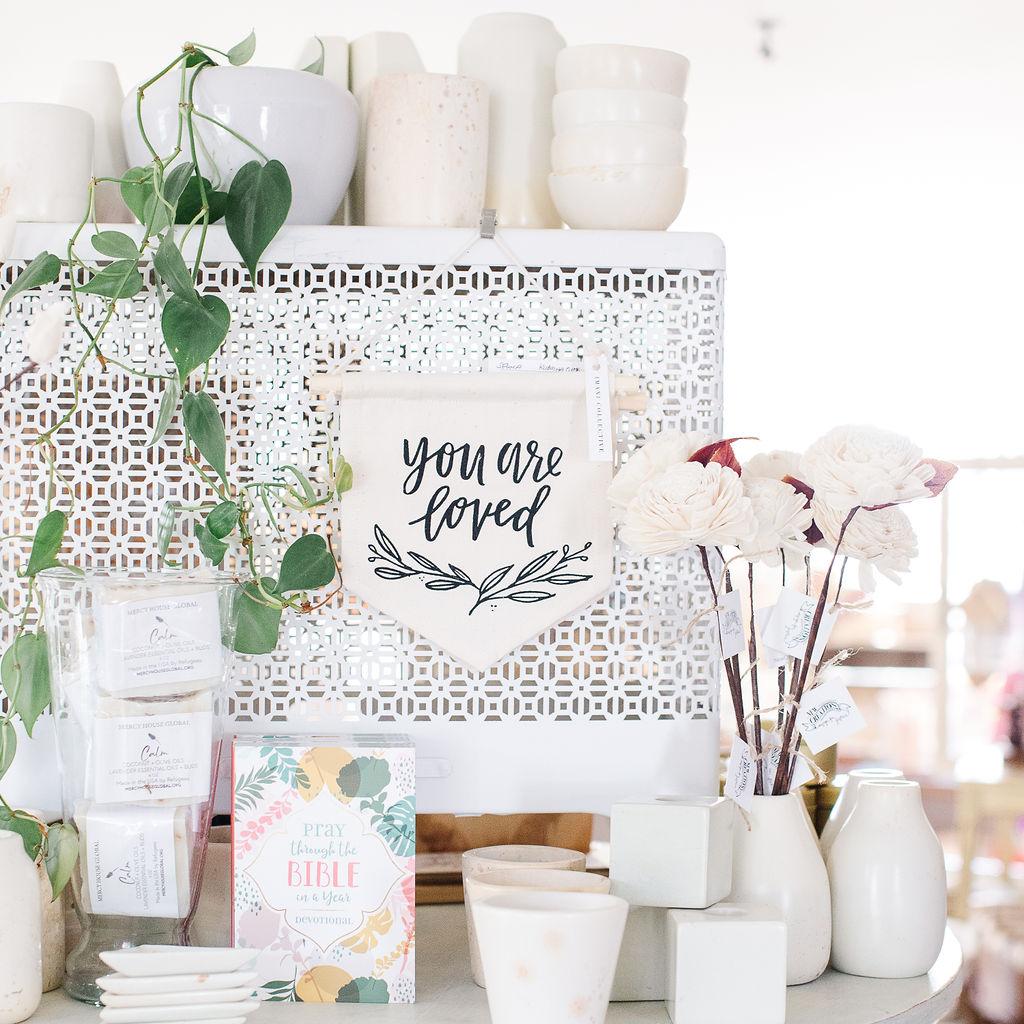 New Creation
New Creation is a faith based nonprofit creatively counteracting sex-trafficking with a local heart + global approach. We offer survivor made goods and fair trade accessories in our shops, as well as provide prevention education on and rescue from human trafficking.
With the belief that our voice, prayer + movement can bring about change, we are continuously developing ways to equip others to join this work of justice.
Located at: 3051 S Main St, Harrisonburg, VA 22801
Visit https://newcreationva.org to learn more or to shop for justice
Author Information:
Angela M. Carter is an author, poet, novelist, blogger, motivational speaker, spoken word performer, visual artist, and advocate/activist. She is the owner of 2nd Avenue Press (www.2ndavenuepress.com). She is the author of Memory Chose a Woman’s Body (unbound CONTENT, 2014) and a forthcoming book, Love is the Dying Dog (early 2022). Angela is a 2014 Pushcart Prize nominee, nominee for the 2015 Virginia Library Literary Award (poetry), and has been featured in a multitude of venues, including The KGB Club in Manhattan and Busboys and Poets. Her publications include Silver Birch Press, Deep Water Literary Journal, Whurk, Vox Poetica, the Plath Poetry Project, Premiere Generation Ink, City Lit Rag, The Word Ocean, Worst Week Ever, Our Stories Untold, Gutsy Living, and several anthology publications. Angela is a graduate student in James Madison University's MA in English program, and works full-time, as a Marketing Specialist, for the same department. Contact: amhcarter@gmail.com
New Creation is not affiliated with, nor endorsed by, LPL Financial or Larson Wealth Management